Founded in 2010 year in China's capital Beijing, the innovative company KAYO Automation Technology Co., Ltd. (or Kayo) is the first in China successful designer and manufacturer of stable quality SMD lines of a budgetary class.

Currently, Kayo has 3 divisions in China:
head sales office in Beijing and two industrial complex: pick&place production factory in Wuxi (near Shanghai) and second factory for production of convection ovens and conveyor equipment in Shenzhen.

While many Chinese manufacturers have developed and supplied convection ovens and non-expensive screen printing printers to the world market, KayoSMT undertook the difficult task of developing an automatic machine for place SMD-components in the budget price range.

Kayo successfully coped with this task, releasing the first inline pick&place machine with a row head and 6 nozzles (model 1706-3DSG).

Next version A4L with 4 heads (for the production of prototypes), as well as 8-heads A8L (for medium SMD line). For entry-level production Kayo offers a desktop automatic D2V-25S with 2 heads.

To equip their installers, engineers KayoSMT decided «not to reinvent the wheel» and successfully adopted proven by decades of successful work solutions from other manufacturers: Vacuum grippers from JUKI and pneumatic feeders CL series from Yamaha.

The design department of KayoSMT never stops on achieved, currently underway is the development of a new fast 8-heads machine with video-centering of components directly on the mounting head and electronic feeders (looks similar as the SM series from Samsung/Hanwha).

Very soon will appear compact pick&place machine analogue of Neoden 4 on the market, but at a more attractive price.

Team «KayoSMT», with more than 10 years of experience in sale, installation and service SMT equipment, aspires to the successful development of electronic industry, equipping all developers and small experienced production a modern, reliable, and at the same time truly affordable equipment. We believe that Kayo's pick&place machines are the future of the prototyping and mid-range SMT production segment.

Operability of KayoSMT' equipment confirmed by the practice in productions of our clients. We are ready to demonstrate you the full Kayo line at work in the production of one of the first in EU Kayo customer in France.

Look forward to Your requests to show KayoSMT equipment in real production mode! 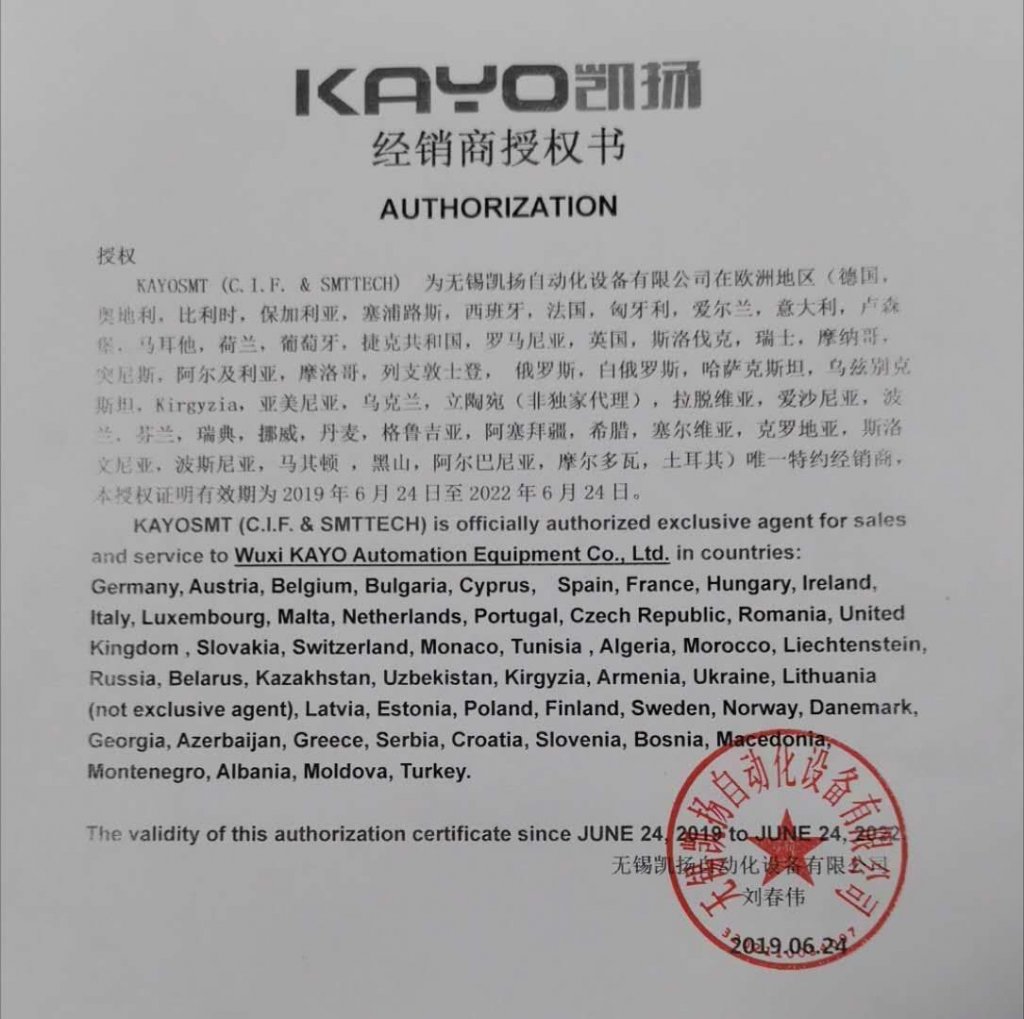 KayoSMT uses cookies to improve and customize your experience on our website. By browsing further, you agree to our use of cookies.
Read our Privacy Policy to learn more.
reject accept
X
Privacy Policy
We never sell personal data and we carry out all processing operations in strict compliance with the EU General Data Protection Regulation (GDPR). Cookies are stored on your individual device and you have full control over their use. You may deactivate or restrict the transmission of cookies by changing the settings of your web browser. Cookies data that are already stored may be deleted (only if you are a registered user or provide us with the full cookie identificator) at any time by appealing to our support team — info@kayosmt.eu. If you visit KAYO SMT site with cookies deactivated, you may possibly not be able to use all of the functions of our site to the full extent. You will not be able to opt-out of any cookies or other technologies that are “strictly necessary” for the functioning of our website and services. You can exercise any of the rights mentioned in this Privacy Policy in your Account and/or by contact with KAYO SMT team info@kayosmt.eu: Where you have provided consent, you may withdraw it at any time, without affecting the lawfulness of the processing that was carried out prior to withdrawing it. Whenever you withdraw consent, you acknowledge and accept that this may have a negative influence on the quality of the KAYO SMT Site and/or Services. You further agree that KAYO SMT shall not be held liable with respect to any loss and/or damage to your Personal Data if you choose to withdraw consent. Where Personal Data is processed for the above purposes on the basis of KAYO SMT legitimate interests, under the GDPR, you may object to such processing at any time. To do so please contact: info@kayosmt.eu. You may opt-out from having KAYO SMT collect your information when visiting an KAYO SMT Enabled Site at any time by contact with or KAYO SMT support team: info@kayosmt.eu.
Request a call
Спасибо, Ваше сообщение принято!